Lecture by Dr. Robert Kusnierz
THE HOLODOMOR (FAMINE IN UKRAINE) OF 1932-1933.
THE VIEW FROM THE POLISH FOREIGN OFFICE 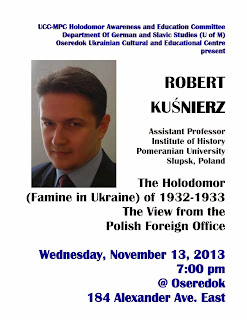 Dr. Robert Kusnierz is the author and co-author of three book publications:
1. Ukraina w latach kolektywizacji i Wielkiego Głodu (1929-1933),
2. Pomór w „raju bolszewickim”. Głód na Ukrainie w latach 1932-1933 w świetle polskich dokumentów dyplomatycznych i dokumentów wywiadu, Holodomor.
3. The Great Famine in Ukraine 1932 – 1933.
He has received various grants and awards, including The Lanckoronski Foundation Scolarship (2002 and 2005 edition), Foundation for Polish Science (2006 and 2010 edition). He was also awarded by a weekly „Polityka” with the award for the best Polish young scientists „Zostańcie z nami” (Stay with us). In November 2007 Dr. Kusnierz was honored with the „For the accomplishments” medal of the 3rd degree through the decree of the President of Ukraine no 1169/2007 for “the significant personal input in the case of showing the truth of the Great Famine in Ukraine of 1932-1933”. On 8 December 2008 during the ceremony at the Royal Castle in Warsaw his wife Renata accepted the medal on behalf of him.
In 2009-2010 (4 months) was an Eugene and Daymel Shlar Fellow at Harvard University (Harvard Ukrainian Research Institute). In 2010 Minister of Science and Higher Education, Prof. Barbara Kudrycka awarded dr. Kuśnierz a stipend for "young distinguished scholars" for 2010-2013.
Dr. Kusnierz focuses his research on the history of the Soviet Union and post-Soviet countries, especially Ukraine. His points of interest are also Polish diplomacy, the Polish-Soviet and the Polish-Ukrainian relationships.